“In every walk in nature, one receives far more than he seeks” – John Muir

How often do you have a day where the only time you get to spend outside is walking to and from your car on your way to and from work, school, the store, or an appointment? For many of us in today’s world, this happens much more frequently than we would like to admit.  Although I love being outdoors and happen to live in one of the most beautiful states in the U.S., it’s all too easy to just go through the daily motions and spend most of my time in front of a screen instead of in fresh air.  That kayak in my parents’ shed hasn’t hit water in two years, my hiking shoes have barely left the shelf, and I feel pretty accomplished if I take Rocky on a walk every night.  It was a big wake-up call on my recent California trip for how much time I don’t spend doing things I already know I love to do, especially when talking to people I met from other states and cities who don’t have the luxury of nature in their backyard.  Plus, there’s the peace and quiet of being away from modern life and the stressors we all have, even if just for a few minutes, that can have intangible benefits physically and mentally (and if you happen to be able to meet a 1,200 year old redwood tree, I highly recommend it).

I decided to make more of an effort to spend time in nature, which some days has been as simple as eating a meal on the deck instead of parked in front of the TV.  However, I also wanted to go on more hikes and quick trips to some of our amazing state parks (with a national park on my official goals list!).  With my birthday coming up, my boyfriend Brian planned on us going on our first hike at Milton Town Forest, a 350-acre woodland park which includes 6 miles of trails and a large central pond, all within a few miles of our home.  I had wanted to check out the park since I moved to town 6 months ago, but was one of those “when we get around to it” things.  Additionally, I had been wanting to take our dog Rocky on some hikes seeing as he loves the outdoors, but his reactivity with other dogs has held me back.  Well, Brian decided we would take the day off and give it a go, Rocky included.

Not going to lie – I was nervous.  With images of Rocky barking at other dogs while I desperately cling to his leash and trying to get him away from the dog/owner who I’m trying not to feel ashamed by in my head, we packed up and headed out.  Thankfully, the parking lot only had 2 other cars and given the time (Friday at 11:30 am), the trail was pretty much deserted. As it turns out, we didn’t meet a single dog and Rocky is a woodsman! 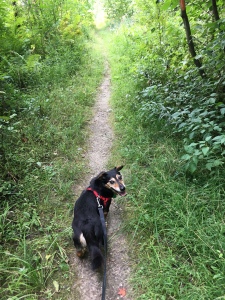 He had the greatest time climbing over tree roots and rocks, plus his beagle-blood was getting a major workout with all the smells. The humans were having a fun hike as well and I really appreciated that we were spending time together outdoors instead of binging a show on Netflix or simultaneously scrolling through our phones. Our phones were only around to capture pictures and I’m really glad that I did – as much as I hate to think about it, I’ll really treasure the pictures of Rocky having a blast someday when he isn’t here anymore. I mean, look at his face!

I also reflected on my tendency to be hesitant and cautious about things, even when there’s a pretty low risk associated with it. For example, we had been curious about whether Rocky likes water or swimming. While I didn’t get him close enough to the pond to find out, Brian casually took his leash and led him down a small bank toward the water’s edge. After a couple seconds of “what if” thinking, I realized that Rocky was stepping right into the pond and taking a big drink. He managed to do a few swim strokes before heading to the shore and looked super happy with himself – so we had our answer!

A bit later, we came upon a Tupperware container underneath a tree stump that I instantly thought was 1) dangerous or 2) something illegal, so just wanted to move on as quick as possible. On the other hand, Brian’s educated curiosity led him to think it was intentionally placed and picked it right up. It turns out he was right and a new interest was formed – geocaching! If you’re unfamiliar with what that means, geocaching is basically a worldwide treasure hunt whereby you use GPS to find hidden containers that contain a log book for finders to sign and personal tokens you can optionally leave behind for your geocachers. Apparently it’s incredibly popular and there are geocaches hidden all over the place – there’s probably one near your backyard! It sounded like a fun way to get outside and explore, so I decided to add geocaching to my goals list for the year; a bonus is it’s a goal and activity that Brian and I can do together. We’re already one geocache deep! 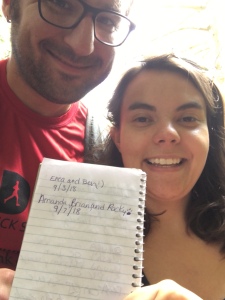 All in all, we had a GREAT afternoon of exploring in nature (for almost 3.5 miles!) and didn’t need to go outside of town to do it. Coincidentally, I had also just read about the 7 parks within town in the most recent parks and recreation flyer, so also decided to add visiting each park to my goals list.

I knew I wanted to add more time outside to my life this year and this list gives me a tangible way to plan and progress. Plus, it’s a place where Brian and I can spend quality time together without a screen AND we can continue working on Rocky’s social skills. Sounds like a win-win-win to me! 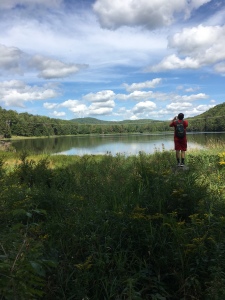 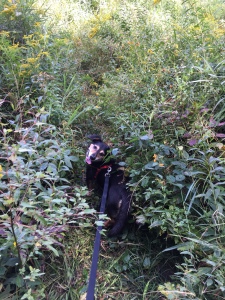 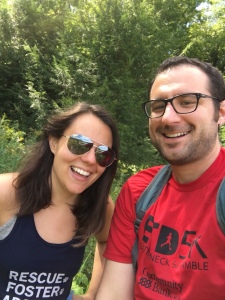 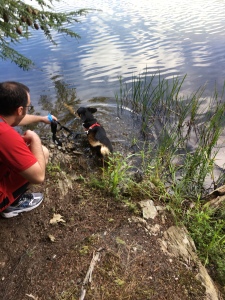 So get outside and play – maybe after you read the latest Thirty by 30 blog post? 😊

As always, thank you for reading and be sure to follow the blog for updates!

Lover of nature, dogs, sugar, music, writing, books, and Joanna Gaines. In no particular order. View all posts by amandatb30

One thought on “Into the Woods!”